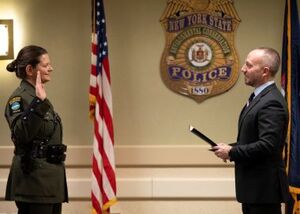 New York State Department of Environmental Conservation (DEC) Commissioner Basil Seggos started the new year off with a bang by appointing Captain Karen Przyklek as Director of the Division of Environmental Conservation. the law (DLE) of the DEC. Przyklek’s promotion follows a successful 26-year career with DLE during which she played a vital role in investigating environmental crimes, assisting the public and effectively improving the division’s work. Pryzklek also makes history as the division’s first female director.

“Throughout her 26 years at DEC, Director Przyklek has demonstrated an unwavering commitment to protecting communities from polluters and safeguarding natural resources,” said Commissioner Seggos. “I am honored to be promoted to her new role as Director as she breaks the glass ceiling and I am confident that she will lead DEC’s remarkable law enforcement officers with dignity and dedication.”

Przyklek started out as an environmental conservation police officer patrolling New York City in 1996, then became an investigator with the Division’s Environmental Crimes Investigation Bureau. In 2014, she was promoted to lieutenant, followed by captain in 2019. Most recently, Przyklek served as captain of the division’s Special Operations Group, which includes the statewide K9 unit, Homeland Security/Radiation Unit, Wildlife Response Team and Haz Mat Training Unit. Przyklek worked diligently to create DLE’s Environmental Forensic Unit (EFU), one of the first such units in the country, to collect forensic evidence from contaminated environmental and wildlife crime scenes. The unit has been deployed to several significant events throughout the state and has put EFU at the forefront of environmental sampling and evidence collection. Przyklek is a 9/11 first responder and helped DEC’s response to the terrorist attacks on the World Trade Center. Prior to joining DEC, she served as a deputy in the Monroe County Sheriff’s Office in Rochester.

Director Przyklek said: “I am honored to work alongside men and women who are dedicated to protecting New York’s fish, wildlife, and other natural resources. Our officers will also actively participate in quality enforcement initiatives. environment across the state to better improve the health, safety and well-being of all New Yorkers. Additionally, I am committed to working to diversify our workforce and aim to increase the frequency of our police academies to better reflect the citizens of New York State.