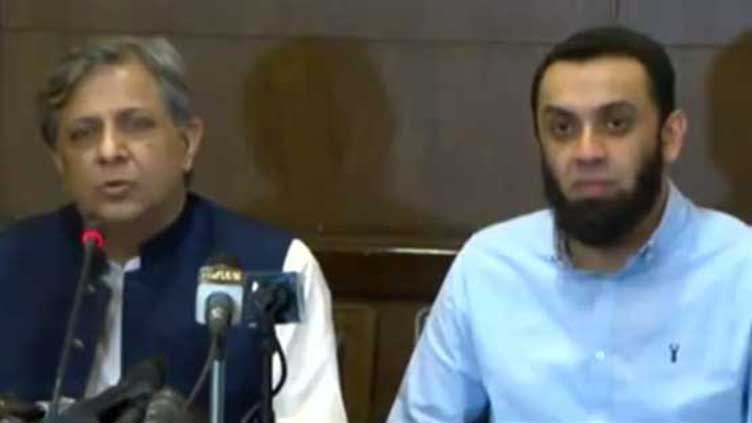 LAHORE, (Dunya News) – Federal Law Minister Azam Nazir Tarar has asked the Supreme Court of Pakistan to constitute a wider bench or full court to hear the case of the election of the Chief Minister of Punjab, as well as the Supreme Court Bar Association’s petition for review. on the interpretation of article 63-A.

Addressing a joint press conference with Attaullah Tarar here on Sunday, he said the political circumstances had reached such a situation that several constitutional issues needed to be resolved.

He said the President of Pakistan had sent a reference to the Supreme Court for interpretation of Rule 63-A before voting on a no-confidence resolution against then-Prime Minister Imran Khan, and it was appealed that votes cast against the guidelines of the leading party should not be counted.

The SC did not issue a stay order and the no-confidence proceedings were closed, he added.

The Justice Minister said that later in the election of the Chief Minister of Punjab, the 3-2 split judgment was given that votes cast against the party leader’s guidelines would not be counted. Therefore, 25 votes cast in favor of Hamza Shahbaz were not counted.

In the second round of elections for the post of Punjab chief minister on Friday, the votes of 10 PML-Q members, who had voted against the directives of party leader Chaudhry Shujaat Hussain, were not counted, in the light of the verdict of the Supreme Court.

He said that the Deputy Speaker of the Punjab Assembly announced the victory of Hamza Shahbaz as Chief Minister in light of the SC’s interpretation of Article 63-A. However, the other candidate, Chaudhry Pervaiz Elahi, moved the SC and appealed to count those votes, he explained.

He said the Supreme Court Bar and civil society have demanded that the hearing of these cases be held by the full court.
Tarar said prominent lawyers, including Latif Afridi, Yasin Azad, Fazal Haq Abbas, Qalb-e-Hussain and Ahsan Bhoon, also said it was a serious and sensitive issue that had been discussed more early by shoals of 8 and 5 members; therefore, it should be heard by the full court now.

The federal justice minister said it was a matter related to the elected chief minister of Punjab’s 120 million people, and that the chief justice should hand his hearing to a full bench. He said an unfounded perception was developing against PML-N through a private channel that PML-N was campaigning against the courts.

He said the PML-N respects institutions, including the judiciary, and rejected the allegations regarding any campaign. He said people were well aware which party was expert in trending or launching campaigns against national and constitutional institutions.

Attaullah Tarar said it was not PML-N norms to campaign against institutions; However, he added, Fawad Chaudhry and Hammad Azhar of the PTI were experts in initiating trends against institutions, including courts, forces and the Electoral Commission. “We know which directions Fawad is leading the trends and who is funding them,” Atta said.

He said Fawad was the person who never told the truth. He said it was a tradition for sensitive constitutional cases to be heard by the full court to end the confusion once and for all. He said the letter from PML-Q leader Chaudhry Shujaat Hussain had yet to appear in court, which was written directly to its members.

He said that earlier the votes of 25 MPA were not counted by declaring them against the directives of the leader of the party, while the directive was issued by Asad Umar, secretary general of the PTI, on behalf of the president of his left.

“In the current situation, the letter was written directly by the party leader, but questions have been raised about it,” he added.
To a question, the Federal Minister of Justice specified that today’s (Sunday) press conference was organized to clarify the position of the PML-N and to suppress rumors against the party.

On another question, he said the Supreme Court did not prevent Punjab Chief Minister Hamza Shahbaz from forming his cabinet as it was a constitutional obligation to lead the government.
Responding to a question about the removal of PML-Q members, he said it was their internal matter and Ch Shujaat Hussain could make a decision in this regard.